The GS5 Video Camera Glasses looks like a normal pair of eyeglasses concealing a camera and mic inside the frame. The lens is located behind a small unnoticeable pinhole in the center of the glasses. The GS5 video recording captures video in 1080p HD resolution with audio capable of recording faces, locations, and other important details.

The GS5 video recording eyeglasses are the ideal all-in-one solution for any covert operation or project. The glasses power on and start recording with a single tap on the right arm. No awkward fumbling for a switch or clicking a noticeable button, the control on the right arm of the glasses is touch-sensitive.

We’re proud to present the most covert video recording glasses ever sold. 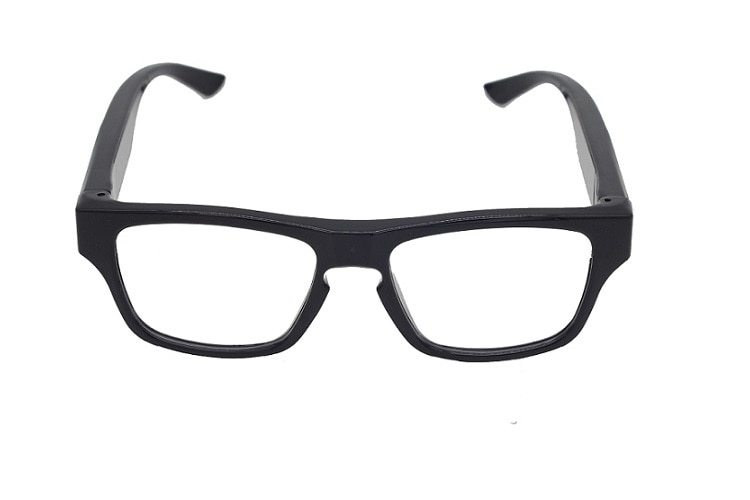 What Solution Will It Help Solve?

Simple Finger Tap Recording
Start recording instantly with a simple finger tap of the sensor on the glasses' arm. Never have to frantically start looking for the recording button in public while missing the crucial video evidence needed. With the simply tap the arm sensor to start or stop recording and turn on and off the glasses.

HD 1080p Video Recording with Sound
The GS5 video glasses feature a high-quality color HD sensor that will record faces, along with important details from impressive distances.  The video is ideal for sharing with friends on Facebook and easily uploaded to YouTube. A built-in high-quality microphone is strategically located at the bottom of the frame making extraneous noises caused by wind and rain no longer an issue.

Video Stabilization
The glasses are equipped with a digital video stabilizer which reduces jitters and shakiness caused by walking, running and other high motion movements. The video glasses are also equipped with a high ISO implementation that reduces blurring when going from a well-lit area to a low-lit area by analyzing high-speed lighting and automatic histogram data that increases low tone detail and preserves high tones.

Inconspicuous Pinhole Camera Lens
The GS5 video-recording glasses have a built-in pinhole camera lens in the center of the camera that's almost unnoticeable.  Even Though the lens is tiny the glasses still record a wide 90-degree field of view capturing both front and peripheral vision. 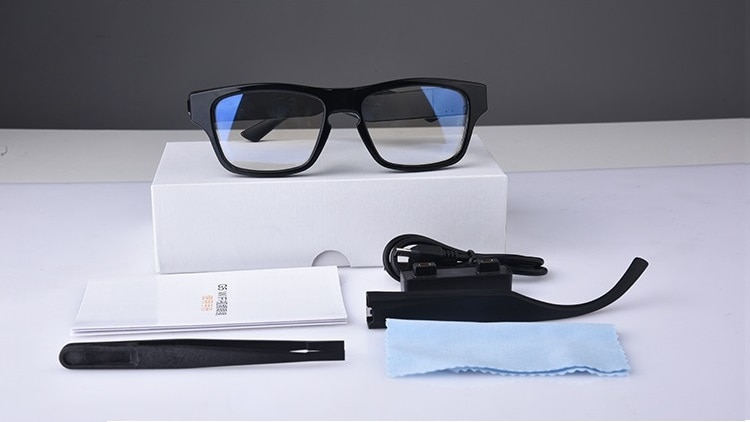 The GS5 camera eyeglasses are comfortable, easy to use, and inconspicuous. A sleek and simple frame doesn’t draw attention to itself. A perfect solution for anything from recording natural home videos to gathering evidence by private eyes and law enforcement.

The GS5 video glasses come with memory, available in 16, or 32GB, and a built-in rechargeable battery that lasts up to 70 minutes and is charged from a secret removable arm. The frames come with a pair of clear plastic safety lenses with no magnification.

Time & Date Stamp Date and time are optionally displayed in the corner of your video for your personal reference.

Up to 32GB of Memory The MicroSD Card is included in up to three sizes, 8, 16, or 32GB of memory to store up to 16 hours of video. Memory cards can be easily swapped out. Erasing older files and recording new files is easy with any PC or Mac so you never have to worry about your memory is full.

Compatible with both Mac and PC
The GS5 is compatible with Windows 98, ME, XP, Vista, 7, 8, 10, and more, both 32 bit and 64 bit, and all versions of Mac OS X Systems. To get the video you want to play, the process is as simple as plugging the glasses into the USB port of your PC or Mac, which automatically opens the device and displays the video files.

Note: The product uses looping video (automatically segmented for 3 minutes) to update and replace old video data. Please save the video data of the product to avoid losing important data.

We proudly ship to the USA & Worldwide

Here at YahBestDeals, we are working every single day in order to offer our loyal customers the best products in the entire market.

Our website is totally designed for fast and secure ordering. Each customer benefits of our Buyer Protection and each order comes with its own Tracking Number.

Our checkout it's using secure socket layer technology (SSL Enabled) and it's trusted by all major web browsers. When checking out, all of your payment information is kept safe and secure.

First time on our website? We would love to have you part of our family. Here's what you are getting:

We have 24/7/365 email support. Please contact us at info@yahbestdeals if you need assistance.

Returns
Our policy lasts 30 days. If 30 days have gone by since your purchase, unfortunately we can’t offer you a refund or exchange.

To be eligible for a return, your item must be unused and in the same condition that you received it. It must also be in the original packaging.

Several types of goods are exempt from being returned. Perishable goods such as food, flowers, newspapers or magazines cannot be returned. We also do not accept products that are intimate or sanitary goods, hazardous materials, or flammable liquids or gases.

To complete your return, we require a receipt or proof of purchase.
Please do not send your purchase back to the manufacturer.

There are certain situations where only partial refunds are granted (if applicable)
- Book with obvious signs of use
- CD, DVD, VHS tape, software, video game, cassette tape, or vinyl record that has been opened
- Any item not in its original condition, is damaged or missing parts for reasons not due to our error
- Any item that is returned more than 30 days after delivery

Refunds (if applicable)
Once your return is received and inspected, we will send you an email to notify you that we have received your returned item. We will also notify you of the approval or rejection of your refund.
If you are approved, then your refund will be processed, and a credit will automatically be applied to your credit card or original method of payment, within a certain amount of days.

Late or missing refunds (if applicable)
If you haven’t received a refund yet, first check your bank account again.
Then contact your credit card company, it may take some time before your refund is officially posted.
Next contact your bank. There is often some processing time before a refund is posted.
If you’ve done all of this and you still have not received your refund yet, please contact us at yahbestdeals@gmail.com.

Exchanges (if applicable)
We only replace items if they are defective or damaged. If you need to exchange it for the same item, send us an email at yahbestdeals@gmail.com and send your item to: 23 Lakeside Rd, Danbury CT 06811, United States.

Gifts
If the item was marked as a gift when purchased and shipped directly to you, you’ll receive a gift credit for the value of your return. Once the returned item is received, a gift certificate will be mailed to you.

If the item wasn’t marked as a gift when purchased, or the gift giver had the order shipped to themselves to give to you later, we will send a refund to the gift giver and he will find out about your return.

Shipping
To return your product, you should mail your product to: 23 Lakeside Rd, Danbury CT 06811, United States

You will be responsible for paying for your own shipping costs for returning your item. Shipping costs are non-refundable. If you receive a refund, the cost of return shipping will be deducted from your refund.

Depending on where you live, the time it may take for your exchanged product to reach you, may vary.

If you are shipping an item over $75, you should consider using a trackable shipping service or purchasing shipping insurance. We don’t guarantee that we will receive your returned item.